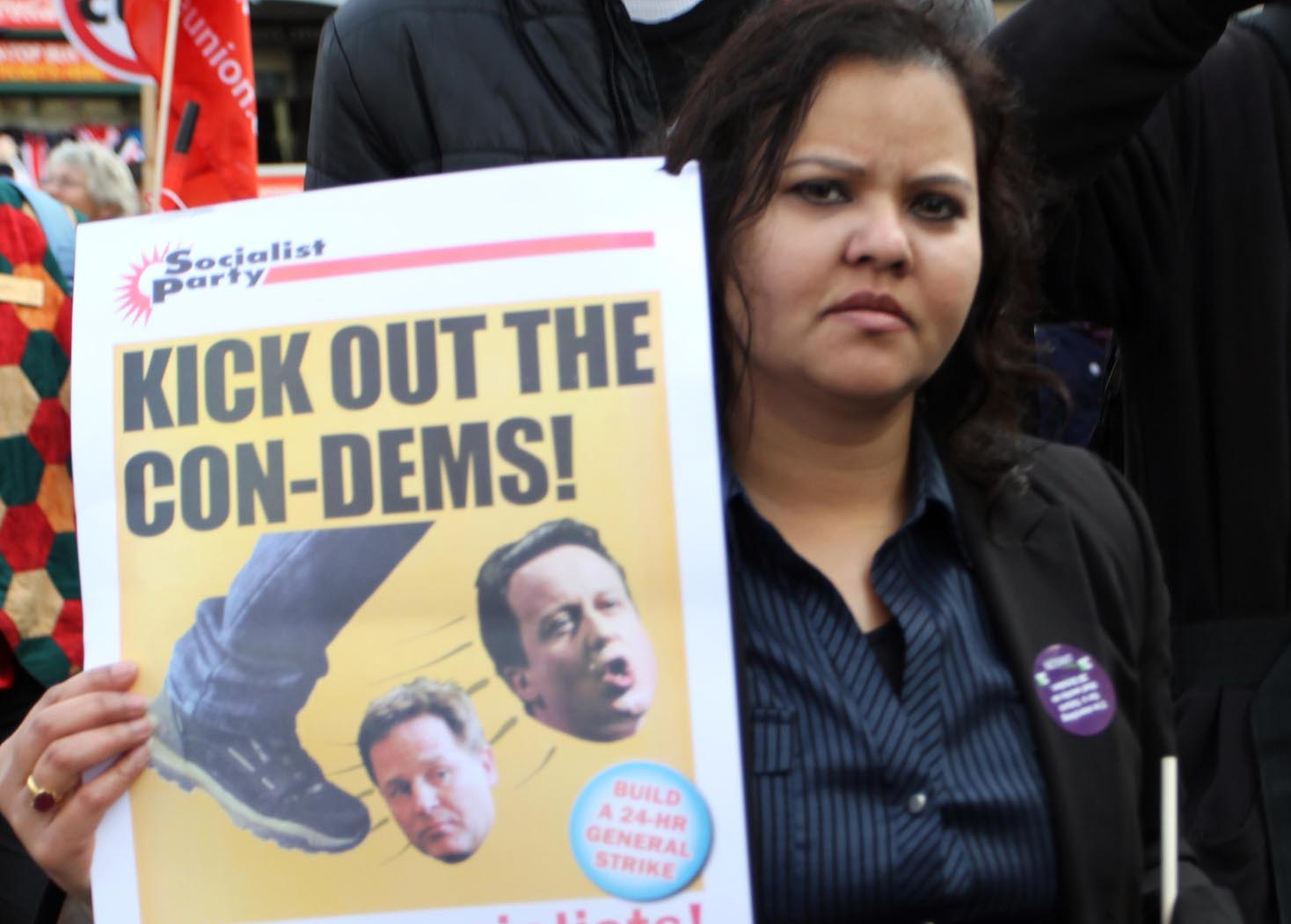 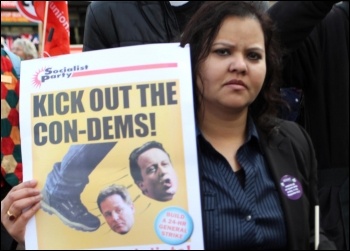 Kick out the Con-Dems, photo Senan   (Click to enlarge: opens in new window)

An ‘apology’ from David Cameron, however grovelling, is nowhere near enough. He and his rotten government should resign immediately.

“In the dock of the Old Bailey… the verdict is this Tory leader is criminally incompetent or mendacious”, summed up Kevin Maguire in the Daily Mirror today. “The PM stood behind his mouthpiece [Coulson] when damning evidence emerged, then stuck two fingers up to the nation by inviting forced-out Coulson for a weekend at Chequers … Cameron’s ‘full and frank’ apology was neither full nor frank. The charge sheet against the PM is as long your arm”.

Cameron is desperately trying to wriggle his way out of this latest stinking scandal to hit his government: the now undisputed criminality of the man – Coulson – he appointed as his chief press officer.

But it’s time to say ‘enough is enough’.
This government of corrupt, millionaire Tories and their Lib Dem hangers-on should get out of office now.

A general election should be called. Let working people, pensioners, people on benefits and students have the chance to give their own verdict on these fat cat, tainted politicians who are up to their necks in serving the interests of themselves and their big business friends – including Murdoch – while inflicting a struggle to get by on the rest of us.

Cosying up to Murdoch

After the 2007 conviction of News of the World reporter Clive Goodman for phone hacking, Cameron had eagerly employed Andy Coulson, the resigned News of the World editor, as the Conservative Party communications director, installing him in 2010 at the heart of Downing Street.

In his rush to consolidate this further deed of ‘partnership’ with the Murdoch empire, Cameron had no desire to look into “detailed evidence” that the police already held at that time that contradicted Coulson’s claims of innocence. He didn’t even check the comments made by the judge who sentenced Goodman, the Guardian’s Nick Davies reminds us today. Davies also points out that Cameron gave “profoundly misleading evidence” when defending his attitude to Coulson while speaking on oath during the Leveson inquiry.

There was no need for Cameron to rely on Coulson’s ‘word’, as he has pathetically tried to argue; there was plenty of reason to question and investigate Coulson’s actions. As Guardian political editor Patrick Wintour comments, Cameron “chose not to find out” about Coulson.

In any case, it completely defies credibility to believe that Coulson didn’t know how lots of intrusive stories were being obtained while he edited News of the World. Phone hacking on an “industrial scale” was carried out, on thousands of people, along with cash bribes to police and other public officials.

There is widespread incredulity that Cameron’s erstwhile dining buddy Rebekah Brooks, News of the World editor prior to Coulson, was acquitted. Revelations came out during the trial and before of ‘disappeared’ emails and other information from her time at the helm.

Scotland Yard has now placed Rupert Murdoch himself in its sights, a long overdue development considering the damage to people’s lives that he has presided over. While he and his corporate empire have so far escaped trial, one of his victims, leading Scottish socialist Tommy Sheridan was unjustifiably convicted in a perjury trial in Scotland in which Andy Coulson gave false ‘evidence’.
Coulson’s conviction is further reason for that verdict to be declared unsound.

The entire Cameron-Coulson-Murdoch scandal indicates the profound rottenness at the centre of government. The whole cabinet has presided over this debacle, including chancellor George Osborne who was closely involved in the hiring of Coulson.

All these millionaire ministers are part of a big business-backing elite that has bailed out the bankers while raining austerity down on working class and middle class people.
They have been immersed in scandal after scandal: governments – whether Tory/Lib Dem or Labour – have been mired in the moral baseness of ‘cash for questions’, MPs expenses disgraces and other degenerate activities.

Miliband promoted the Sun; We promote the Socialist

Labour leader Ed Miliband showed his own willingness to sycophantically court Rupert Murdoch when he was pictured earlier this month promoting a copy of the Sun newspaper.

Cameron pleaded that he had wanted to give Coulson a “second chance”. Where is even the first chance for the millions of young people and low paid workers who are struggling to survive faced with insecure, low paid jobs? Now there should be no ‘second chance’ for Cameron and his government. He should resign, with his whole cabal of wealthy, self-serving Tories going with him.

The phone hacking scandal has exposed some of the depths to which the capitalist media sinks in its drive for profits and to promote capitalist ideology.

We need to campaign for the end of the media being owned by a small minority, arguing instead for a media that is neither under big business control nor state control, but under democratic working class and popular control.
As part of bringing this about, the main printing and broadcasting facilities should be nationalised and made available for full freedom of discussion, with democratically decided apportioning of access.

Gemma Dowler, elder sister of abducted and murdered schoolgirl Milly Dowler, whose voicemail messages were hacked by News of the World journalists, has accused establishment politicians of having an “incestuous relationship” with the mass circulation press.

Speaking after Coulson’s conviction, she gave the example of former Labour prime minister Tony Blair whose cosy relationship to the Murdoch media empire was well known.

When it came to light that Milly’s phone had been hacked, Blair (who was the prime minister when Milly disappeared) did not contact the Dowler family.

But when former News of the World editor Rebekah Brooks was being investigated by the police over hacking allegations, Blair phoned Brooks offering her his support.