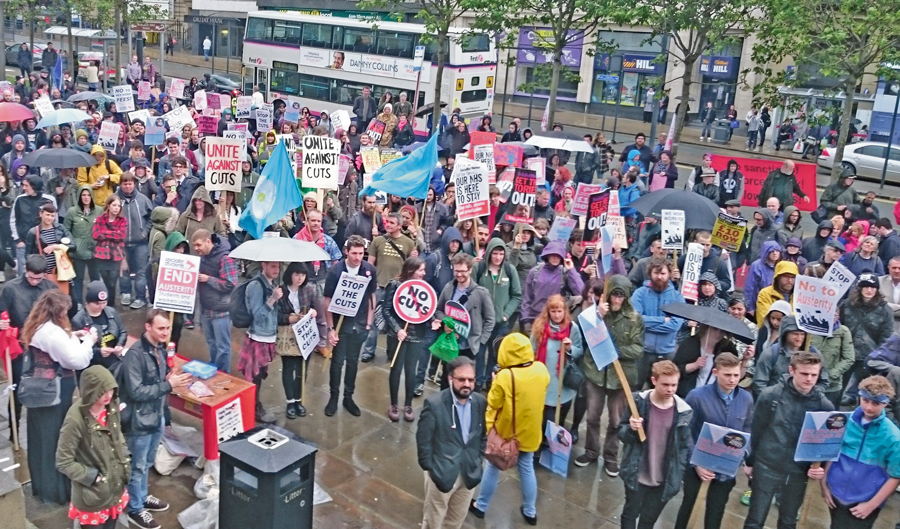 Queen’s Speech protests: determination to fight back on a new scale

“Tory scum, here we come”. This chant, which echoed through Westminster’s streets on 27 May, was a declaration of war.

Thousands of people gathered outside Downing Street. This fresh, youthful and – above all – angry protest demonstrated the huge appetite for struggle. If we want to beat austerity, we’ll need a fight back on a scale not seen for decades.

Youth Fight for Jobs, as well as other campaigns and groups, had put out a call to gather in central London. Organised at relatively short notice, the protest was mainly built through word-of-mouth and social media. By around 5.30pm up to 2,000 mostly young people were marching (and sometimes running) around Westminster.

The protest passed Downing Street, marched through Parliament Square, and snaked past Buckingham palace and Scotland Yard before returning to Trafalgar Square. It was here that we semi-spontaneously gathered on the steps outside the National Gallery and Youth Fight for Jobs led a short rally.

The crowd listened to speeches from different campaigns and organisations, as well as from individuals who wanted to share why they had come to protest. Paul Callanan, speaking for the Trade Unionist and Socialist Coalition was cheered and clapped when he attacked the so-called ‘austerity consensus’ supported by all the mainstream parties.

Calls for a 24-hour general strike – urgently needed to start building the kind of movement capable of ending austerity as well as new anti-union laws – were met with applause and chanting.

But it was clear the protest had not run out of steam.

After taking a vote, the demonstration continued. We marched to Oxford Street where tax avoiding companies like Boots and Vodafone were named and shamed.

There was a short sit-down protest at Piccadilly Circus before we wound our way back to Downing Street. Here, at around 8.30 in the evening and after more than three hours of marching, the protest began to wind down.

Many expressed an interest in finding out more about the Socialist Party. 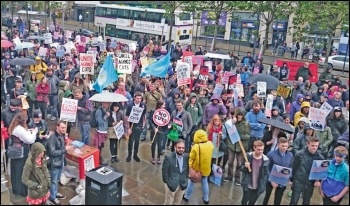 A Leeds anti-austerity protest on the day of the 2015 Queen’s Speech, photo by Leeds SP   (Click to enlarge: opens in new window)

An anti-austerity protest organised by Leeds Youth Fight for Jobs on the day of the state opening of parliament – which inspired others across the country – drew 1,000 people.

The protest, in Victoria Gardens, Leeds, heard from young workers, students, anti-bedroom tax activists, asylum seeker rights campaigners and trade unionists, among others, on the savage plans to attack working class people that the new Tory government is announcing.

Ben Myers, a new member of the Socialist Party, said: “The idea that young people have no interest in politics was dispelled as myth as hundreds of young people – ineligible to vote for the government that will control our education, jobs and housing up until we are 22 years old – turned out to protest against the Tories’ assaults on the working class. They only have a slim majority of 12 which could easily crumble.”