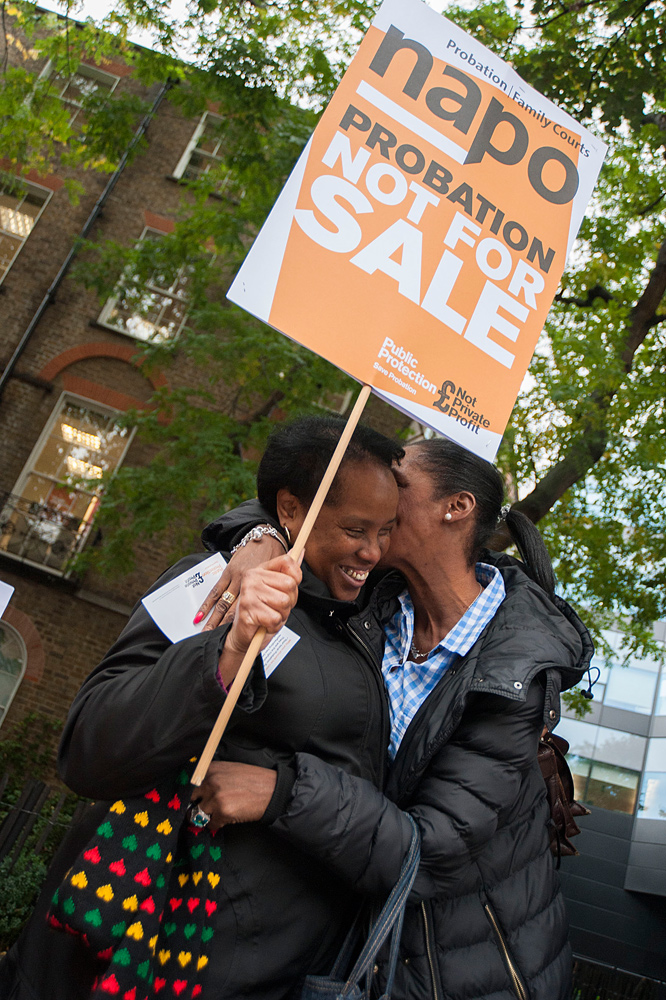 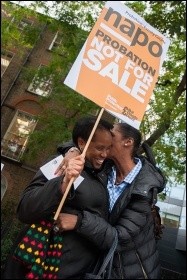 Probation workers on strike to save the service in 2013, photo by Paul Mattsson   (Click to enlarge: opens in new window)

Former justice secretary Chris Grayling’s act of vandalism in splitting up and privatising over half of the probation service has predictably led to swingeing job cuts and attacks on terms and conditions in the newly outsourced Community Rehabilitation Companies (CRCs).

Meanwhile, staff transferred to the National Probation Service (NPS) are struggling to manage high caseloads within a dangerously under resourced and unresponsive management structure. As Napo has warned for some time, the public is at increased risk.

Anyone hoping for respite after Grayling’s brutal regime can be under no illusions that newly appointed justice secretary Michael Gove will provide any relief. He pledged to Tory conference that he would bring “reforming zeal into the dark corners of our prison system” with an “unremitting emphasis” on “reform, rehabilitation and redemption.”

But he fails to mention how he will achieve this with budget cuts of £249 million at the Ministry of Justice. There is also no mention of where probation services fit into his plans.

It seems clear we are in for more of the same, with the added bonus of a full frontal attack on our ability to organise as a union. It is no coincidence that Napo was singled out as one of the first to have the system of union deductions from pay (known as check-off) forcibly removed.

Our stand in frustrating Grayling’s Transforming Rehabilitation agenda (the government’s reform programme for rehabilitating offenders) reminded the Tory establishment of what workplace organisation can achieve.

So they are out to destroy us along with every other trade union. This is why it is vital for Napo to join with others in opposing the trade union bill.

Some members are worried about threats facing the union from privatisation and breakup of the service. But Napo can both survive and prosper independently with a fighting strategy.

That starts with improving union density in the CRCs and encouraging NPS members to switch to direct debit. Beyond that, we can inspire a new generation of activists, untainted by the defeats of the past, to revitalise the branches and refresh the union at all levels.

Jeremy Corbyn’s victory as Labour leader has shown that, when offered an alternative, young people in particular are not prepared to just sit back and accept more austerity. We have to replicate what Jeremy was able to achieve by offering dynamism and hope to our members, many who witness first hand what cuts to local services really mean to our offender clients and to victims of crime.

With almost breath-taking hypocrisy coming from a Tory minister, Gove tells us he wants prisons to become places where inmates can undertake meaningful work and education to prepare them for life on the outside. This is rich, when his predecessor closed 15 prisons, cut staff by 41% and watched prisoner numbers soar to dangerous levels

Outgoing chief inspector Nick Hardwick reported earlier this year that staff shortages, overcrowding and a rising level of violence had brought the system to the edge of collapse. Significantly, he said that training, education and other activity outcomes were ‘dismal’ – one in five prisoners spent less than two hours a day out of their cells.

What does Gove’s announcement really mean for prison reform? His record as education secretary in forcing schools to become academies gives us a clue.

In a similar vein he plans to remove central regulation from prisons, allow governors ‘freedom’ to run their own establishments and pay them based on ‘outcomes’.

He wants to see more businesses going into prisons and running them on business lines. This sounds more like a recipe for exploitation of a captive workforce than a progressive plan for rehabilitation.

What price justice in our courts?

Leicester magistrate Nigel Allcoat hit the headlines last month when he was suspended for paying £40 towards the court charge of a destitute asylum seeker. He later resigned his position.

Anyone who pleads guilty at a magistrates court has to pay costs of around £150; if they are found guilty after trial it goes up to £520; if it goes to crown court and they are found guilty it can go up to £1,200 on top of any fine, compensation or other charge. With an estimated 85% of all offenders on benefits or limited means, this is an unjust imposition on the poor, and scores of magistrates are resigning in protest.

The criminal court charge, introduced in April, and cuts to legal aid represent further attacks on the poorest in our society. Funding is no longer available for a wide variety of civil cases including family law, and flat rate fees for criminal cases are driving many local law firms to the wall.

Napo members struggling to provide a fair and decent service for criminal and family courts often witness first-hand the impact of Tory enforced austerity. It’s one of the reasons why we continue to dedicate ourselves to protecting victims and helping people change their lives.

It’s also why many of us are enthused by the new mood of optimism pushing back against austerity and fighting for a fairer society.

Building a mass movement against austerity