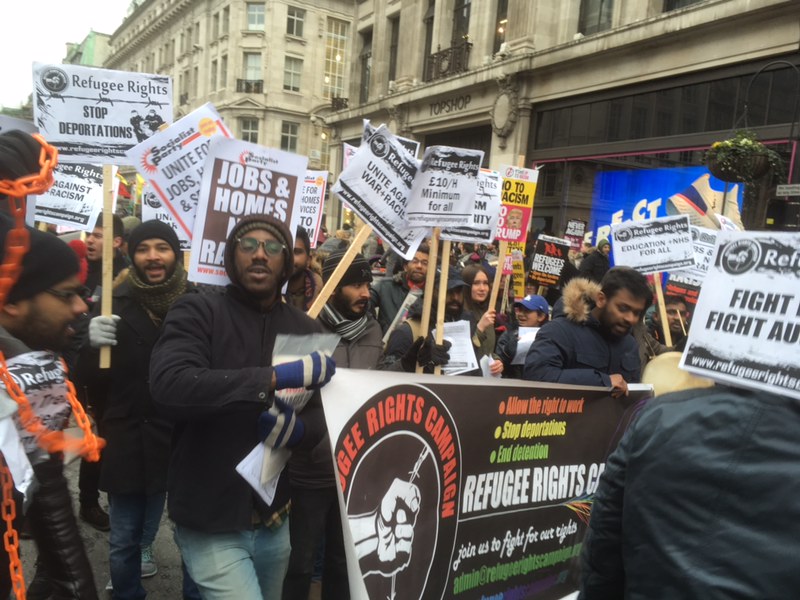 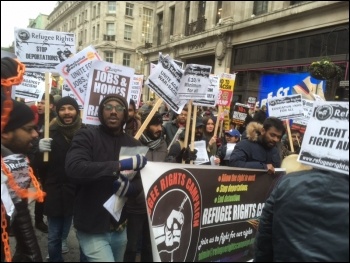 The United Nations International Day for the Elimination of Racial Discrimination on 21 March commemorates the day in 1960 that police opened fire and killed 69 people at a peaceful demonstration against the apartheid pass laws in Sharpeville, South Africa. It has been marked in the UK since 2014 by an anti-racism demonstration.

This year thousands braved the cold to march. One of the chants heard most vehemently was “refuges are welcome here”. We agree that people fleeing war, persecution and poverty are welcome but we must go further. Refugees are part of the working class. Refugees need to be able to organise and fight for their rights and fight with the rest of the working class for jobs, homes and services for everyone. This will assist in combating racist division.

The Refugee Rights campaign made a big splash, and what singled them out was that they were refugees fighting for not only their rights but those of the wider working class. This campaign correctly makes the link between racist immigration policies and the effect of capitalism on the rights and opportunities for the majority of society.

Refugee Rights approached the organisers Stand Up to Racism several times in the run-up to the event to ask that the campaign be allowed to speak on the platform, but were ignored.

The Socialist Party marched together with our refugee comrades demanding that refugees be given the right to work and access to education, highlighting the racist ideology behind detention centres and demanding their immediate closure.

We make the case for a £10 an hour minimum wage and a free NHS, and the right to join a union.

‘We are refugees fighting for our rights’ was the demand that stuck with me for the day. While people marching say that refugees are welcome, under capitalism they will always be under attack in a society that lines the pockets of the rich and pits layers of the working class against each other to maintain the status quo.

Only through joining the fight for socialism can we truly eradicate racism.