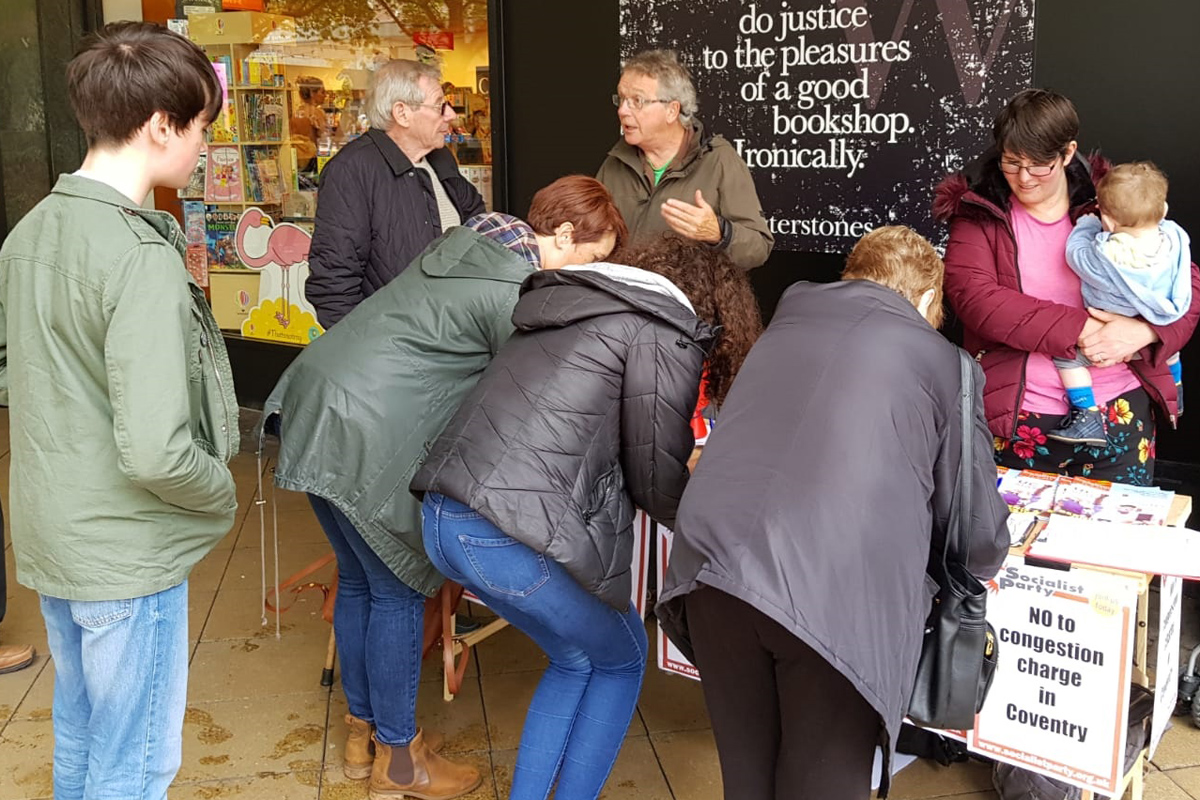 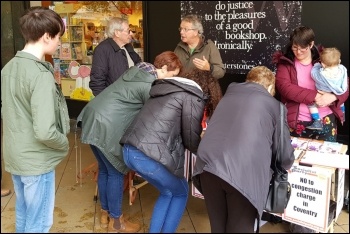 Campaigning against the congestion charge in Coventry, June 2019, photo by Coventry Socialist Party   (Click to enlarge: opens in new window)

Coventry’s Labour council has spent two years drawing up a plan to tackle nitrogen dioxide hotspots in two parts of the city.

This plan includes laudable attempts to promote the use of electric vehicles and create more cycle routes, but less-welcome traffic-management proposals to redirect vehicles through side streets to reduce concentrations on main roads. Overall the cost would be £83 million.

The government, however, rejected the scheme and instructed the council to bring in a chargeable ‘clean air zone’ – a congestion charge – instead. This would be at the highest level, class D, and could charge cars up to £12.50 a day.

52,000 people work in the proposed zone, which also covers 80,000 residents in some of the poorest parts of the city. The council admits the charge would “disproportionately fall on disadvantaged social groups that have non-compliant vehicles and for who affordability is an issue.”

In other words, it’s a tax on those who can’t afford new, cleaner cars! We are being punished by taxation when what is really needed is a serious attempt to improve the environment through public investment and better public transport, which could more quickly reduce people’s reliance on older vehicles.

Everyone agrees with the urgent need to tackle these problems. The question is how quickly can that be achieved, and who should pay?

The government has identified 22 cities where nitrogen dioxide emissions from traffic will exceed legal limits by 2020 and has instructed local councils to come up with plans to combat the problem. Many involve charges.

So, not for the first time, the Tories are talking green while dumping the responsibility onto local councils and the cost onto ordinary working people.

Coventry Socialist Party has started a petition against the scheme which has over 6,500 signatures. The petition opposes government imposition of a congestion charge in Coventry.

We call instead for determined action to improve air quality, protect people’s health and tackle climate change. The best solution would be free public transport in the city, using environmentally friendly vehicles, with proper public investment and planning of rail and bus services in the public interest not for private profit.

There are 120 cities around the world with free public transport – joined a few weeks ago by Luxembourg. If the government is serious about this being a national problem, let’s have a national strategy, not punishment for those who struggle to afford change. For example, nationalisation of Ford’s Bridgend engine plant could develop it into a centre of excellence for clean vehicles.

The Labour council says it’s against a charge, but in June it accepted £4.5 million from the Tory government to begin preparations.

Labour says if the charge comes in it would be at a lower rate of £8 a day. But buried in its documents it admits that over ten years the cost to residents and workers would be £147 million – in costs of upgrading, and charges paid. That’s just under £15 million a year!

The council has conducted no serious public consultation. It’s almost as if they hope this will slip through unnoticed.

Over the next few weeks Socialist Party members will be out on public stalls, organising leafleting of the affected area, and visiting trade unions and community organisations. We will build support for a socialist alternative to pollution based on clean, cheap and frequent public transport, and public investment into clean vehicles to make them affordable to all.