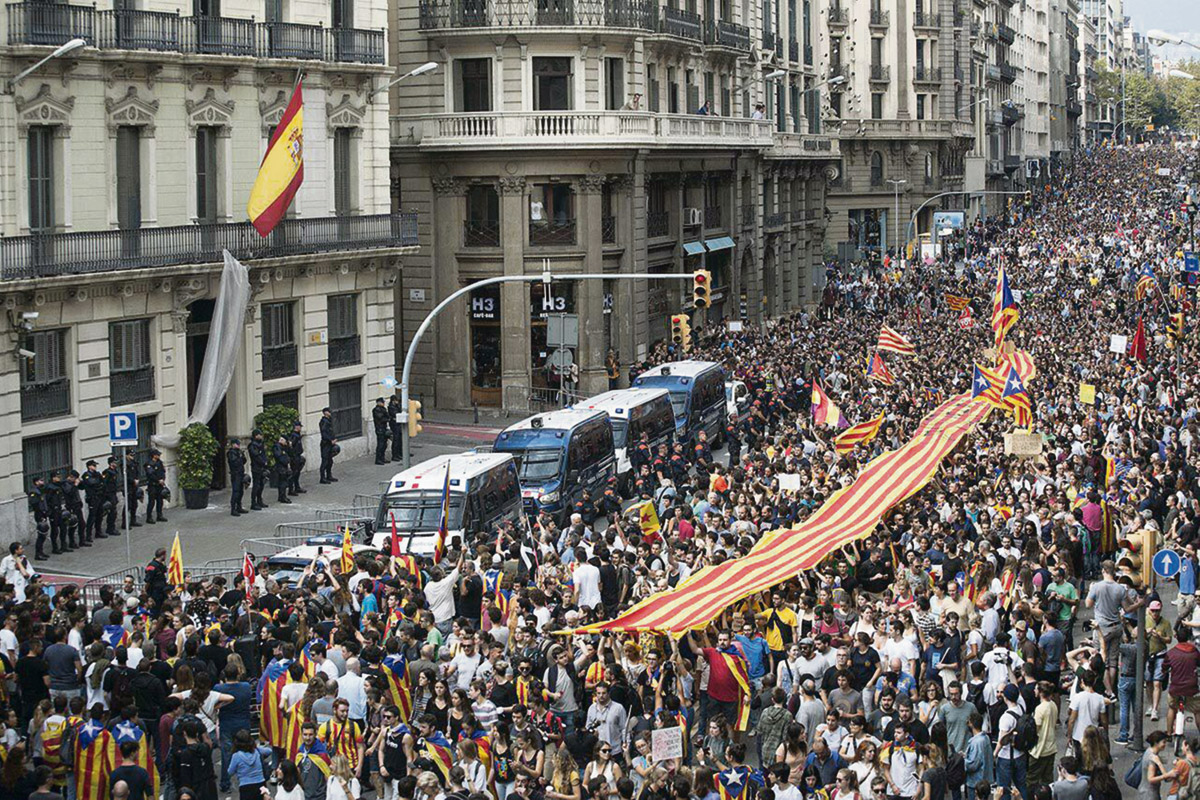 The verdict of 12 Catalan nationalist leaders on charges arising from the failed independence struggle in 2017 is expected soon. Nine have been charged with rebellion, which can result in 25 years in prison. These charges are designed to warn and intimidate the Catalan masses against further action for self-determination.

Tony Saunois, secretary of the Committee for a Workers’ International (CWI), draws out the vital lessons of this struggle.

The PP government adopted brutal repression, reminiscent of the Franco era dictatorship, to try and intimidate and crush this movement.

The struggle saw a mass movement of millions, including powerful revolutionary elements. Mass protests of workers and the middle class; strikes, and the building of local community committees of struggle, (Committees for the Defence of the Republic) and splits within the state apparatus took place.

On Catalonia national day – Diada – 11 September, an estimated 1.8 million took to the streets in Barcelona in support of independence. Thousands were injured as the Spanish state machine deployed brutally repressive forces, shut down the internet and seized ballot boxes.

On 27 October the Catalan parliament declared independence. The Spanish state dismissed Catalan President Carles Puigdemont and the parliament, imposed direct rule, and arrested some Catalan nationalist political leaders on charges of sedition and rebellion. Puigdemont and some other leaders went into self-imposed exile.

Despite the determination and willingness to struggle by the Catalan masses, the movement suffered a defeat. The capitalist nationalist leaders like Puigdemont were incapable of leading the struggle for independence to a successful conclusion.

To secure a victory for an independent Catalonia it would have been necessary to link up the struggle with a programme for a socialist Republic.

This could have appealed to those sections of workers and immigrants in Catalonia who opposed the independence movement and had suffered the austerity and cuts which the capitalist Catalan nationalist leaders like Puigdemont and his party, PdeCat (Catalan European Democratic Party), had carried out. These capitalist leaders could not conduct a struggle against the capitalist class in the rest of the Spanish state which would never accept an independent Catalonia.

An independent socialist Catalonia, would guarantee all language and cultural rights for those from other parts of the Spanish state and other countries who live in Catalonia.

It could have appealed to the workers in the rest of the Spanish state, Portugal and throughout the European Union to join together to form a voluntary, democratic socialist confederation.

The independence movement was also betrayed by the social-democratic Psoe, (Spanish Socialist Workers’ Party) and the ‘anti-establishment’ left party Podemos (‘We can’), led by Pablo Iglesias, which also opposed the struggle for independence.

Since the defeat of this movement the determination of the Spanish ruling class to refuse to accept an independent Catalonia has been demonstrated by continued repression. This is despite a change of government – now a minority government led by Pedro Sanchez of Psoe.

For example, in the run up to sentencing the Catalan nationalist leaders, on 10 October, the police have ‘discovered’ a ‘terrorist group’ which was allegedly planning attacks in Barcelona.

All of those arrested are members of the Committee for the Defence of the Republic (CDR) which has previously defended and organised peaceful civil protest actions.

Very conveniently this terrorist plot has been discovered as sentencing is about to be passed. For the charge of “rebellion” to be proven, links to violent or terrorist activity is necessary.

The defeat of the movement in Catalonia has opened up new divisions within the nationalist movement. There is widespread criticism of PdeCat, now led by Catalan President Joaquim Torra, The leaders of the ERC (Republican Left of Catalonia) and JxCat (‘Together for Catalonia’) pour cold water on the movement, arguing that the independence struggle cannot be won yet and sowing the illusion that it is possible to negotiate an agreement with Psoe.

Pedro Sanchez and his ministers have made clear their pro-capitalist policies despite some cosmetic window dressing. They will accept the demands of the EU for further cuts of €15 billion in the next two years and a ‘reform’ of the public pensions system.

Sanchez has not made clear he will repeal the attacks made by the PP on labour rights or education. The cosmetic presentation of a ‘new’, ‘modern’ government with a majority of women and for the first time in Spain a gay Minister, did not mean policies and a programme that will challenge capitalism and defend the interests of the working class.

In the April election the right-wing were massively defeated in Catalonia. The main beneficiaries were the ERC, a party of the urban middle class, which has now won some support among the working class.

Illustrating how far Podemos and Pablo Iglesias have moved to the right, they proposed a coalition with Psoe and demanded to enter the government with ministerial positions.

Sanchez rejected this proposal. Not because he or Spanish capitalism fear Iglesias but because this coalition may arouse expectations in the working class to demand reforms and concessions from the government.

Fresh elections have now been called for November. The horse-trading between the parties in Spain and inability to form a government reflect, as in other European countries, the polarisation and need for a bold socialist alternative which Podemos has failed to offer.

Today, there is a certain ebb in the movement demanding Catalan independence following the defeat of the independence referendum campaign. This was reflected in the much smaller attendance at the Diada in 2019 of approximately half a million.

However, this can change rapidly especially if harsh sentences are dished out to the nationalist leaders.

Such a party’s programme would include: the release of all political prisoners and dropping of all charges; for the right of self- determination for the Catalan, Basque and all peoples; for an independent socialist Catalonia; no to austerity programmes; repeal all anti-labour laws; for the unity of the working class of the whole Spanish state in a struggle against capitalism for a socialist alternative.