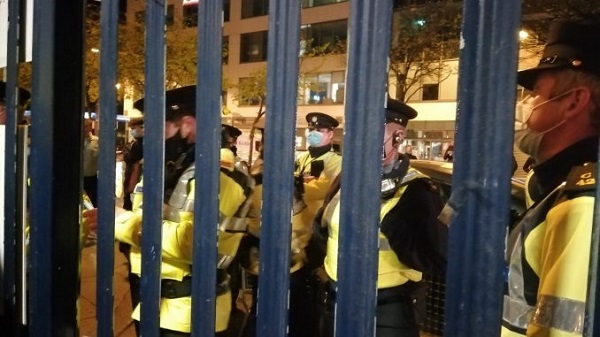 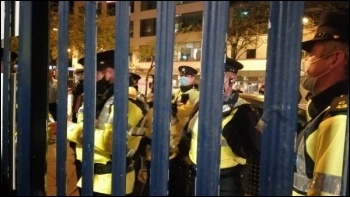 Gardaí [Irish police], at the behest of big business, prepare to forcibly remove former Debenhams retail workers and their supporters at the Parnell Street, Dublin, depot, on 23 April   (Click to enlarge: opens in new window)

These workers, sacked by Debenhams following its closure, have spent the last year preventing the stock inside the stores from being removed. The Gardaí played a shameful role in aiding trucks driven by scabs to gain access to the bay that was blocked by the picket line.

This dispute has laid bare the role of the Gardaí and the Irish State. Legislation that was passed under the guise of Covid-19 has been used since the beginning against the strike, with workers’ names being taken by the Gardaí at a number of demonstrations for alleged breaches of the legislation. An injunction was granted to liquidator KPMG a number of months ago.

After less than an hour, the High Court essentially criminalised the right of these workers to continue their pickets. Workers and supporters were arrested and put in cells following an occupation of the Henry Street store in September. In a number of stores, the Gardaí have already assisted in removing workers and helping trucks get past the picket line. Again, on the night of 23 April, protesters were threatened with fines and imprisonment for breaching Covid legislation.

As socialists, we oppose any increase in state and Gardaí powers. We have seen how they have been used against the working class: movements like Black Lives Matter and protests over the murder of Sarah Everard, in London, and against the Debenhams workers in Ireland. The capitalist state will always act in the interests of the establishment, private property and big business.

Attacks on workers’ rights will continue as we are forced to pay the price of the pandemic. It is essential that we transform our trade unions into fighting trade unions that can defend workers from the bosses’ attacks.