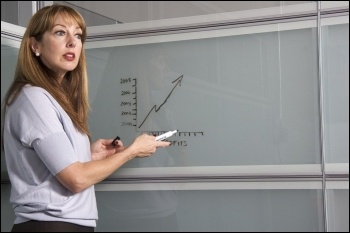 Sunak’s pay freeze for this year was a further slap in the face to all school staff who kept education going through the height of the Covid pandemic. The small pay increase that might be forthcoming next year is likely to be a cut in real terms given inflation.

No wonder teachers are starting to leave the profession. If we are not careful, the ‘market forces’ of higher wages in some other sectors of the economy will lead to serious teacher shortages and a bigger threat to young people’s education than Covid itself.

Teachers’ pay is based on recommendations from the supposedly ‘independent’ School Teachers Review Board (STRB). But the STRB is not independent, it’s a government puppet.

Appeals to Tory MPs’ better nature through petitions and postcards from individual teachers, which is what the union leadership is currently urging, are not enough. Instead, the NEU should prepare teachers for a strike ballot for a fully funded pay rise.

The union executive should be put on a war footing, organising meetings in every school and college to mobilise members. Let’s not forget the collective strength of the NEU forced the Tories to back down over the unsafe opening of schools back in January. A similar campaign on pay could be an unstoppable force in winning a decent pay rise for all education workers.