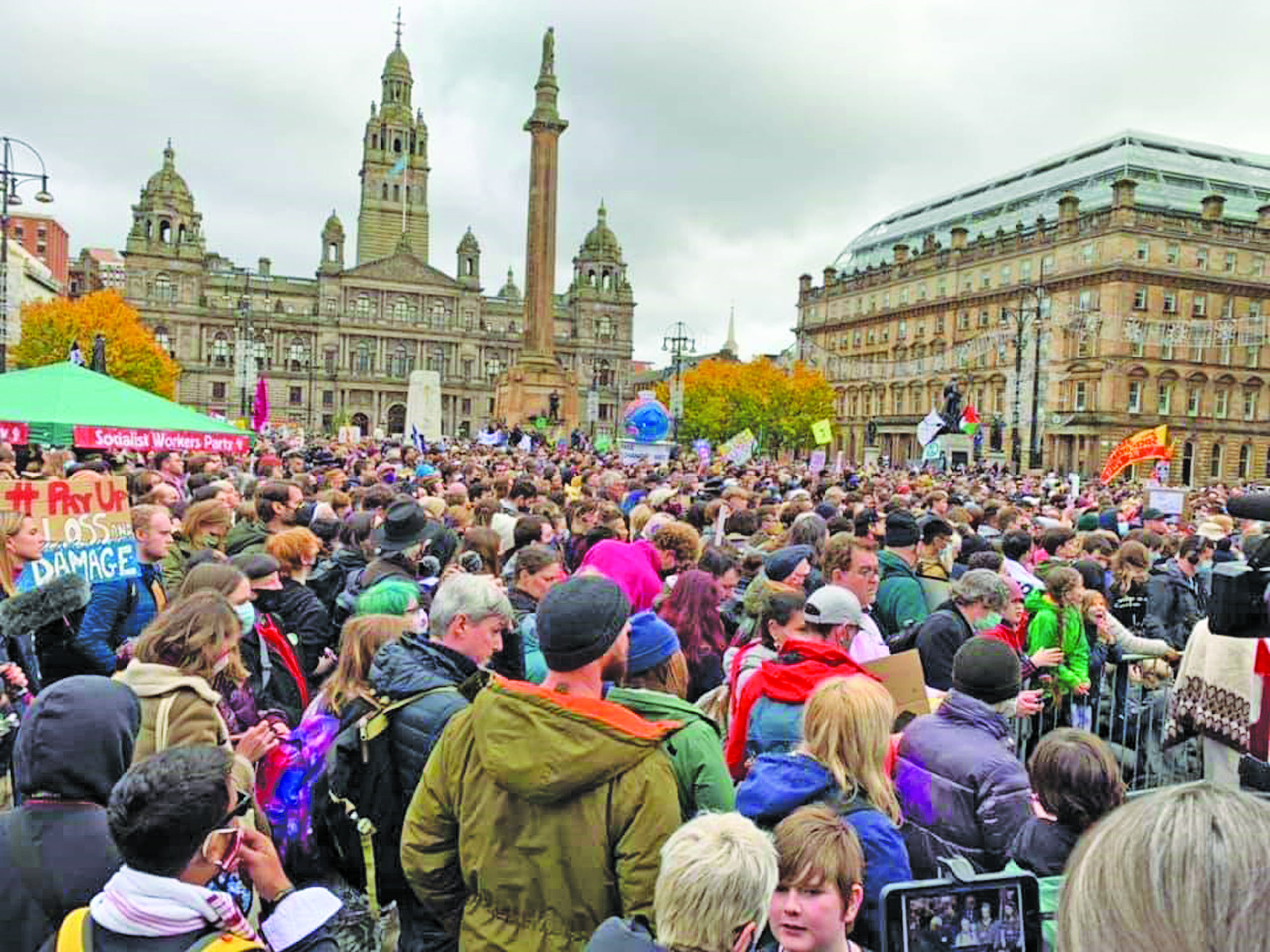 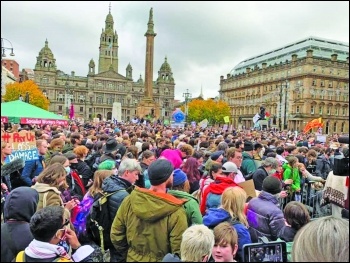 Glasgow saw some of the largest political mobilisations since the onslaught of the Covid pandemic on 5 and 6 November. The catalyst was the bosses’ COP26 summit, a forum to find ‘solutions’ to limit global warming, but more importantly, to save the capitalist system.

Friday’s march, up to 20,000 strong, was an overwhelmingly youthful demonstration organised by Fridays for Future, with a huge openness to the ideas that a systemic change to the profit-driven rottenness of capitalism is necessary.

Saturday, organised by the COP26 Coalition, was a larger demonstration of around 70,000. The widespread lack of faith in COP to deliver a workable solution for the vast majority of humanity was clear to see.

This consciousness was reflected by the global figurehead of the youth climate strikes, Greta Thunberg, with her comments in George Square on Friday. Correctly, she stated that “we cannot solve a crisis with the same methods that got us here in the first place”, continuing with a call for “drastic annual emissions cuts unlike anything the world has ever seen”.

The question, which Greta does not yet answer, is how is this to be done if the capitalist rulers are in charge of the economy? The purpose of Socialist Party Scotland’s participation on the demos was to answer that question with our central demand – build a mass working-class movement for socialist change to end climate change.

Significantly, young people in the climate movement are increasingly open to the methods of class struggle, demonstrated by youth strikers joining cleansing workers’ pickets, and the return of this solidarity by a strong Glasgow GMB contingent on the Friday march.

Another important step forward is the growing support for anti-capitalist and socialist ideas on both demonstrations. Our party had a colourful and well-organised impact on the marches. At our red gazebos, socialist change to end climate change flags, placards – which we sold for donations – and leaflets were eagerly sought by hundreds of young people.

Our members spoke for hours through our PA systems on both days popularising a socialist solution to the climate crisis. We explained that you can’t have capitalism without climate destruction, the need to end the rule of the billionaires and big business, and argued for the building of a mass movement of workers and young people to sweep away capitalism and build a socialist world.

The enthusiasm for bold and uncompromising socialist ideas was reflected in the 262 copies of the Socialist sold on the marches. And the £700 in donations we received at our stalls from placards, badges, leaflets and in solidarity with our ideas. More than 6,000 copies of our leaflet were also distributed. 53 people filled in cards to join Socialist Party Scotland.

The interest in socialist ideas was also reflected at our meeting after the Saturday demonstration, which was well-attended by 50 young people and workers, many of them attending their first-ever socialist meeting.

By raising our slogans for socialist change to end climate change we provide a marker in the discussion taking place outside COP about the best way forward. We haven’t yet convinced everyone mobilised by the climate movement of our programme, but we made an important impact on the weekend’s events.

The environmental crisis, wrought by unchecked capitalist greed, is just one of the clearest examples of how the capitalist system offers no future for the vast majority of humanity. The evidence from the COP26 protests is that workers and youth are increasingly drawing that conclusion. We would appeal to them to discuss with us, join our party and fight for a socialist transformation of society.

Well over 1,000 marched from Cardiff City Hall to the Senedd, and in Swansea over 300 gathered in Castle Square. Socialist Party Wales and Socialist Students had large and lively contingents shouting “Our planet is not for sale” and “Socialist change, not climate change”.

Being the only organisation involved, literally flying the flag, for the need for socialist change clearly set us apart from other groups, and this was reflected when several young people, upon seeing our material, handed back other placards to take up our own.

At the Cardiff rally there were many good speeches, but it was Socialist Party member Katrine Williams, speaking on behalf of Cardiff Trades Council, who put forward the most clear course of action to avoid climate change: “We need to nationalise all the energy companies so that we transition to fossil-free energy production, insulate our homes and transition to heat pumps instead of gas boilers.

“We need to nationalise steel so we can safeguard jobs in Port Talbot and transition to hydrogen-powered steel production.

“We need the Welsh government to nationalise public transport. Instead of subsidising the profits of Stagecoach, Arriva and First who then charge sky high fares, we should use those subsidies to provide free public transport.”

Roughly 10,000 marched in London, and the Socialist Party had a strong contingent alongside young socialists and the Tamil Solidarity campaign. While the demonstration was mainly made up of an activist layer, we successfully put forward a socialist programme.

Maggie Fricker, health worker, trade unionist and Socialist Party member was cheered by the 500 who rallied in Southampton when she said: “We have a saying in the labour movement, you can’t control what you don’t own. We can’t trust the multinationals. It’s time we took them over and ran them under workers’ control and management.

“We the 99% need to organise for socialist change, so we can harness the world’s resources and plan to feed and take care of everyone and our planet.”

A couple of thousand people joined the COP26 protest in Leeds. It was noticeable that important sections of the trade union movement had mobilised for the demonstration, with noticeable delegations from Unite, NEU, PCS and local trades councils on the march. Militant trade unionists, such as Bakers’ union general secretary Sarah Woolley, spoke.

Unfortunately, other speakers included those who are not friends of the workers’ movement or the environment. Labour West Yorkshire Mayor, Tracy Brabin, was heckled by some attendees over her support for the expansion of Leeds-Bradford airport. Leeds Labour council, despite adopting a ‘climate emergency’, has supported the project with funding for an airport road link! Brabin has also failed to act so far on her election pledge to bring public transport in West Yorkshire back under public control.

Around 1,000 people marched around Plymouth city centre before a rally. RMT regional organiser Barry West spoke about the importance of expanded rail services, and ended by saying we need a revolution to avoid climate change.

Over 1,000 protesters marched through the city centre to Temple Row, joining the ever-growing cry for immediate action against climate change. Representatives from Youth Fight for Jobs and the PCS Union delivered powerful speeches once the march returned for the main rally.

More than 600 people gathered at Forest Recreation Ground for the opening rally of the march for climate justice. The Nottingham COP26 Coalition, which the Socialist Party participated in, had worked for two months to organise the event.

Despite talks, the Labour city council refused to close the road for the march. It was far too big to fit on the pavement and we were determined to march on the road. XR Rebels blocked the junctions so we could march safely and explain the protest to drivers as they did so.

Socialist Students stood out among the crowd at the Brighton climate protest. It was a huge coming together of climate and socialist activists with a common goal of a system that needs to change. A favoured sign by a Socialist Students activist read ‘Capitalism is burning our children’, and this is why we fight!