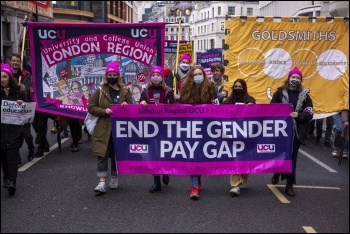 University and College Union (UCU) members at 58 universities took three days of strike action last week, launching two separate disputes over pensions, pay and working conditions. They were the first UK-level disputes the union has taken strike action over since the 2019-20 wave of industrial action was prematurely concluded at the onset of the pandemic. 64 UCU branches will now begin a campaign of action short of a strike, working strictly to contract to highlight the excessive workloads undertaken by university staff which goes unvalued and unpaid.

There are plans to announce further, escalating action in the new term if management do not concede to the union’s demands, which includes the employers revoking pension cuts, agreeing to a £2,500 pay increase for all staff, and action to tackle unmanageable workloads, pay inequality and insecure contracts. Additionally, 42 branches that were close to achieving the 50% turnout required under the Tories anti-union legislation are being reballoted so they can legally join action next term.

Socialist Party members in UCU support this strategy of escalating the action, both in terms of action taken and the number of branches taking part. We also say that the disputes would be strengthened if other education trade unions ballot to join the action, and if further strikes are coordinated with other unions fighting back against the bosses’ attacks.

Speakers at the rally highlighted how the lack of an above-inflation pay rise and the rising costs of living, have left many of them struggling to heat their homes while management continue to exploit university staff through poor working conditions, precarious contracts and attacks on pensions. Socialist Party member Roger Thomas, speaking on behalf of Bristol Trades Council, raised the importance of linking struggles, such as the one currently being undertaken by UCU members, with other campaigns in order to build a fightback against the bosses’ attempts to make workers pay for the multitude of crises heading in our direction – together we can win!

Despite the rain and snow, university staff and their supporters persevered in their strike around Durham across the three days of industrial action. Their placards and banners made it clear what was being fought for: an end to casual contracts, bridging the gender and race pay gaps, and fighting against the cuts to pensions. The students’ union supplied free tea and coffee to fight off the cold; some students even bringing doughnuts to the strikes in a demonstration of solidarity with their protesting teachers and staff members. In place of cancelled lectures, UCU organised online teach-outs for students on anti-racism and social change to highlight the importance of the issues they were on strike for.

These are issues that have gradually been worsening since the privatisation of higher education began, issues that will impact lower-band university staff and working-class students especially hard. Speaking as a student from a low-income background, I see this strike as vital to fight back against the poverty gap that corporatised universities are widening.

Members of Socialist Students Leeds took part in the UCU industrial action at the University of Leeds. Leeds University UCU branch voted to strike over both the USS dispute and the ‘Four Fights’ dispute, and our members were on the picket handing out fliers, and convincing students and staff alike to join in the strikes and to support the union activity.

For one of the strike days, the entrance we picketed was entirely attended by members of Socialist Students Leeds, which gave us the opportunity to link the dispute to the wider need for socialist change within the tertiary education sector, and the need for an end to the marketisation of education.

Over 100 people attended the rally on 3 December, where several members of the union spoke of the atrocious conditions for staff.

As a Socialist Party member and a second year student at Bradford university, I went down to show solidarity with the staff. I talked to staff about the government cuts over the past ten years and about the treatment of them, and also about the student union ban on political societies which they also disagreed with. There was passion shown by the staff, showing discontent with the government’s policy towards universities and Labour’s lack of support for the strike.

Myself and other Socialist Students members went down to the University of Birmingham’s main campus to show solidarity with striking staff members. Morale alone the line was high despite the cold. The day wound up with a rally with rousing speeches from students and staff.

Socialist Party and Socialist Students members attended UCU pickets across London to offer solidarity and discuss with strikers the way forward for the disputes, receiving a warm response from picketers.

On 3 December we also joined a regional mobilisation of UCU members, which included a rally addressed by the general secretary, Jo Grady, as well as the RMT general secretary Mick Lynch. The rally was followed by a march starting from Bloomsbury and picking up picketers from various other London campuses on the way to lobby outside financial institutions that have a stake in the USS pension.

It was a positive step that the rally was addressed by representatives from the RMT given night tube drivers were on strike later that day. More collaboration between different unions in struggle will be an important step moving forward for workers.

At the University of Sheffield, workers were also striking over the closure of the Archaeology Department, and the restructuring of the School of Languages. The UCU branch won an additional local ballot for strike action against these cuts.

I visited the picket lines with other members of University of Sheffield Socialist Students to show support for university staff in these disputes. Staff described the lack of security as the most frustrating element of their contracts – many of which are renewed every 12 months at short notice. Postgrad students struggle to balance mandatory teaching with their own studies, and research staff are constantly applying for external funding and evaluating their finances to even continue their work.

The recent reshuffling of the School of Languages and Cultures has also left students and staff outraged and disappointed at the impact this will have on the quality of the learning for languages degrees, and this same anger is carried towards the department’s attitude on pensions.

These disputes are fully justified, as management attempts to curb pension benefits and wilfully impose closures – including redundancies – despite the university having an annual profit of £127.1 million and an endowment fund of £45.5 million.

Brighton Socialist Party and University of Brighton Socialist Students joined with UCU for its three days of strike action. This industrial action is a continuation of the dispute that sent shockwaves across the country in 2019. Each day of the three-day industrial action our members joined pickets across Brighton, encouraging staff and students not to cross the picket lines.

On 1 December, a demonstration was attended by over 100 students at the University of Sussex, where the students’ union demanded the university support the demands of the UCU, and uphold promises made prior to the pandemic.

Students again proved their support for the strikes by turning out in their hundreds at two separate demos. Sussex students barricaded themselves in Sussex House on 3 December.

At the University of Nottingham, the mood music on the six picket lines was very positive. Around 150 UCU members and supporters then attended a rally.

Andreas from the UCU branch gave a damning indictment of the role of the university’s senior management who sit on national bodies.