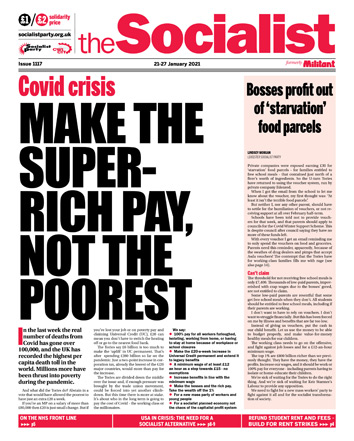 Peace and Justice Project – no way forward for socialism

The Tory blame game: scapegoating the working class – 100% pay for all now

It’s so busy. There are so many patients. For weeks now there have been more Covid patients than there were in the first wave. Almost every ward has been given over to treating Covid now.

On Saturday 16 January, around 15 Black Lives Matter activists gathered by Parliament Square, in London, to protest the tragic death of Mohamud Mohammed Hassan after being released from police custody in Cardiff

USA in crisis – the need for a socialist alternative

The future of the Rolls-Royce factory in Barnoldswick, Lancashire, and its 350 jobs has been secured after a deal was agreed between the workers’ union Unite and the company

Almost five years since the £10 an hour minimum wage demand was adopted by Usdaw, Morrisons has become the first major company in which Usdaw represents workers, to accept the demand.

Socialist Students has launched a petition to build support for its demands on the way forward for the student movement and to solve the crisis in higher education.

We have now surpassed 400 signatures for our rent strike, with over £710,000 pledged to be withheld. For students there is no equivalent to the furlough scheme, and we’re expected to hand over the majority

London’s May elections: Tories and Labour’s Khan both vying to slash public services

Before I started educating myself, I’m sorry to say that, in part, I fell for the media coverage of ‘scrounging benefit cheats’. Documentary footage of someone saying they couldn’t afford to buy food, before showing their large expensive-looking TV and other gadgets, did wind me up, as someone who has a disability and has had to rely on charity to fill in the gaps in state provision.